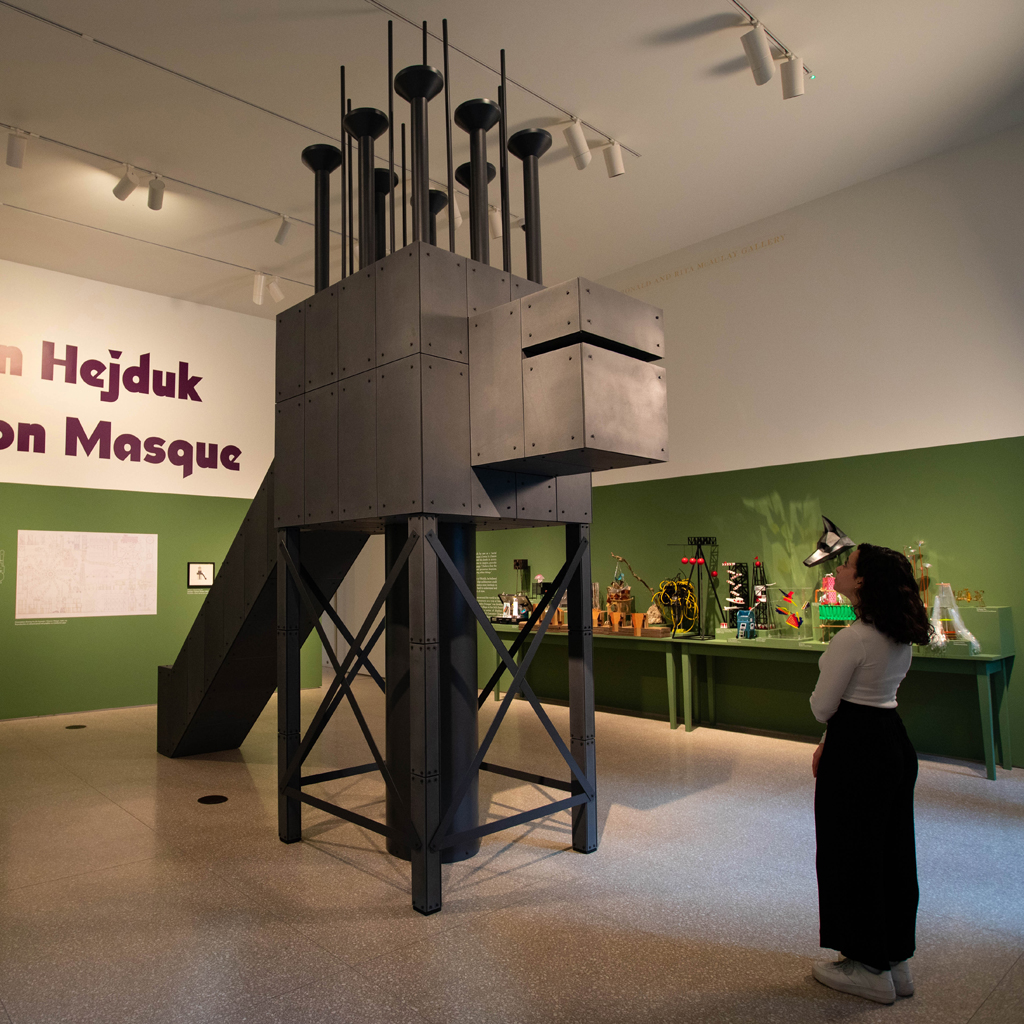 Wednesday 23rd March 2022 marked the opening of ‘John Hejduk: London Masque’, which featured late American architect John Hejduk’s design for the Widow’s House brought to life. Commissioned by the Royal Academy’s Head of Architecture Vicky Richardson, and supported by CDUK, ‘John Hejduk: London Masque’ is the first installation of the Architecture Programme to be held in The Ronald and Rita McAulay Gallery.  The gallery is a free exhibition space at the heart of the Royal Academy, newly programmed by the Architecture Department, that will host a series of architectural commissions to provoke, inspire and create debate.

Masques, popular royal entertainments of the 16th and 17th centuries featuring fantastical costumes and moving sets, inspired Hejduk to transform the way architecture is taught and imagined. ‘John Hejduk: London Masque’ brings to life one of the 68 architectural ‘objects’ conceived and designed by Hejduk forty years ago for his seminal work the Lancaster / Hanover Masque. The Widow’s House, has been constructed as a large-scale model to occupy the full height of the McAulay Gallery.

The display refers to the Widow’s Walk, a feature of traditional New England houses thought to be built for the wives of whaling ships’ captains who would go up to these cupolas and watch the ships come in from sea. Often, they did not come back. The Widow’s Walk was a form of surveillance and waiting, a place of reflection and anticipation.

On the structure design of the display Vicky Richardson, Head of Architecture and Drue Heinz Curator at the Royal Academy of Arts, commented: “Looming awkwardly, the structure seems as out of place and surreal as a character in a children’s fairy tale or a giant apple filling the room in a Magritte painting. The paradoxical form of the Widow’s House, which appears to be part-animal and part-building, is both comical and tragic.”

Curator Vicky Richardson was delighted to be able to use charcoal coloured PaperStone® as the cladding material for the 4.7-metre-high structure, reducing its environmental impact and evoking the ‘Paper Architecture’ of Hejduk, who was a prolific drawer.

CDUK recently launched a new sustainable surface material produced from FSC certified recycled paper and cardboard, which responded explicitly to the brief. The Widow’s House’ is made from a new generation sustainable material, PaperStone® which is a composite surface made from recycled paper and a natural resin; it has a unique textured effect that creates an organic warmth.

CDUK is proudly supporting the 2022 Architecture Programme at the RA and has donated the specified PaperStone® for ‘John Hejduk: London Masque’. Andy Noble, Managing Director at CDUK, said: “We are pleased to support the display as it promotes the importance of environmentally driven designs within the industry, a cause that both CDUK and the RA advocate for. By using PaperStone®, the artwork has the potential to be dismantled and repurposed honouring circular economy principles.”

‘John Hejduk: The London Masque’ has been designed in collaboration with students from the Royal College of Art MA Interior Design programme. During the display, a series of presentations by students and young people will explore Hejduk’s Lancaster / Hanover Masque and the resulting models, with the theme ‘Building Worlds’, will be shown alongside the Widow’s House.

‘John Hejduk: London Masque’ will remain open to the public until 21st May 2023. The exhibition is part of the free events programme.