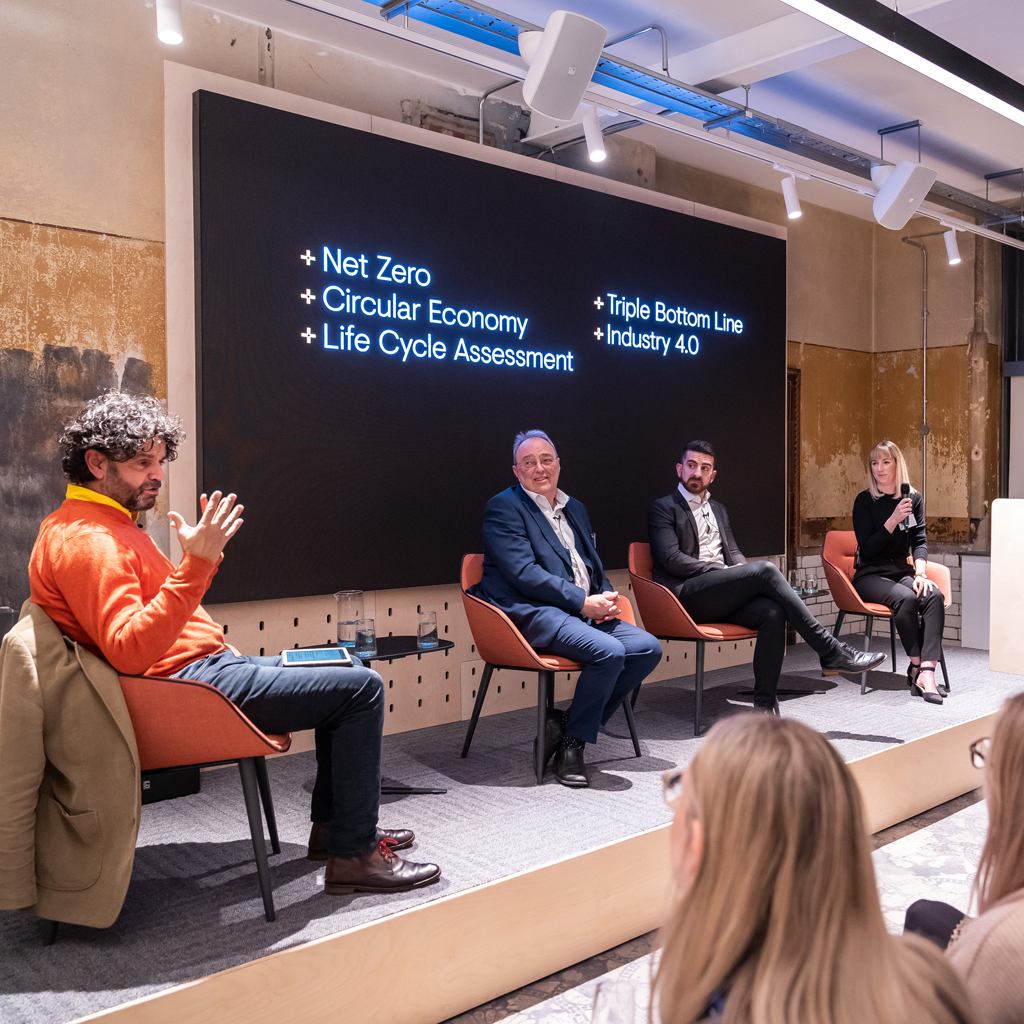 The conversation addressed key issues we are facing in our goal towards achieving a more environmentally-conscious industry. The panellists touched on the importance of policy and building regulations to drive initiatives forward, as well as the need to create awareness of the many sustainable and innovative materials available to the market, especially in large-scale projects.

The level of participation from the packed room of guests served as a reminder that the topic of sustainability is one loaded with emotion, confusion and hope.

For anyone that couldn’t make the event, or for those that did attend, and want a recap on the highlights, here’s how the conversation went…

First up, some jargon busting from Rhiannon – from Lifecycle Assessment – reviewing the potential impacts of a product across resource consumption, human health, and ecological impact – to Industry 4.0, and how it’s considered an enabling technology for more sustainable practice.

This led neatly into the first question from David: “You’re clearly passionate about environmental impact, and have been a voice in this space for many years. Has it sometimes felt as though you’ve been a lone voice?”

“I would say in my professional career, no, it hasn’t always felt like a lone voice, but that’s not a good thing,” answered Mark. “What I mean by that is that quite a lot of my career I’ve been working with people who are interested in environment, they care about it. And this is going back 30 years. But why I say this isn’t a good thing is that people like me sometimes forget that we are not in the majority, that we create a little bubble, we talk to each other and we think everybody thinks like us. A learning point for me and people like me is that if we’re really going to make systemic change happen, we need to change the narrative and we need to talk to people in a way that makes the change that’s required palatable.”

“In a professional capacity, I think probably 50% of the time I’ve been alone – throwing an idea out there and feeling that nobody’s listening”, commented Stuart, “the other 50%, everyone’s behind it, and it’s great. And you feel really enthused and you come out really excited about the future of our project. In my personal life, though, that’s the bit that concerns me more than my professional career. I think people want to evade change.”

“I had quite a rude awakening going into industry after my undergraduate degree – there I was with bright eyes and bushy tail, ready to get stuck in and save the world”, confessed Rhiannon, seconding Mark’s view that to engage others it takes a change of narrative: “You realise that not everyone shares the same views with you, but it’s really about translating it into a language that means something to the person that you’re talking to.”

Continuing on the topic of narrative, David asked: “The government looks to tighten its commitment on reaching net zero by 2050. State local authorities declare a climate change emergency. Do you think the marketing message is right and actually relevant enough to incite change?”

Mark states the message needs to be as clear as: “Act now”. “Because the truth is that when you look at the numbers, the hard numbers of what we need to do in this country and need every other country across the globe to do in the next ten years, then it’s a huge change. And so everybody needs to start that action now. The narrative, I think, needs to be sold by those people who are most able to do it, and they may be some of the people in this room.”

Speaking of the current sustainability narrative, Stuart believes it’s based on fear. “That puts people off doing something because they bury their head in the sand. But if you showed them the nice bit, they might think about doing just a little bit. Show us what the future world could look like, how you could breathe cleaner air and travel around and live your lives completely different and be happier and healthier.”

This point was supported by Rhiannon: “We need to do more to showcase the possibilities” – something Manchester Metropolitan University is fervently dedicated to doing, with 30 current projects including looking at local recycling and plastic waste, for transformation into useful, valuable products. Plus grinding bricks and concrete waste from construction and demolition sites locally for 3D printing.

So, once the challenge of inspiring change has been addressed, what does the panel want this to look like?

Stuart’s response, “stop, or, at least, reduce, flying”, garnered a mixed reaction from guests. As did Mark’s suggestion of buying an electric car – a comment from the audience called for walking and cycling to be pushed instead. Rhiannon suggested that everyone become “an advocate” – “There’s usually only one person willing to talk about it, but we need to make this the norm.”

Turning the attention to the architecture, design, specification and construction sectors, our audience of industry leaders posed questions around designing with sustainability in mind. From these discussions, some key points were raised:

Ending the session with some appreciation for our Studio’s home, Stuart said: “Manchester is way ahead of the game in terms of its local authority. We’re in the right city for innovation.”

To close, David asked the panel to give a last one or two word piece of advice to our audience in response to the vast and complex topic of sustainability:

Rhiannon: “Be a good ancestor.”